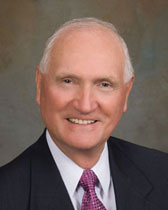 Prior to entering the search profession, Mr. Arend had a successful career with two Fortune 500 Companies, Dow Corning Corporation and Armco. He attained senior management positions in sales, product marketing, and human resources, all of which included responsibility for evaluating and selecting key personnel.

Mr. Arend served as Sr. Warden (Chairman) for the St. Francis Episcopal Church, Director of Sugar Land Shale; Chairman of the Energy Committee for the Rotary Lombardi Award; an Advisory Board Member of the BioMedical Technology Club; as well as, Past Member of the Board of Directors for the Rotary Club of Houston, National Association of Corporate Directors, member of Greater Houston Manufacturers Association, and past President of Board for Dunes of West Beach. Mr. Arend was elected as a Director for the Municipal Utilities Board in his community. Mr. Arend also was instrumental in the formation of the Houston Technology Center, a 501c3 organization accelerating the commercialization of new technology and conducted the searches for the first, second and current Chief Executive Officer.

Mr. Arend earned a BS in Chemical Engineering and an MBA from Michigan State University. He spent two years in the US Army as a Systems Analyst for the North American Air Defense Command. Mr. Arend is married with two sons both leaders in the software business. Further, Mr. Arend continues to be active with golf and in numerous competitive tennis teams where he has earned two National titles.